All Different and Yet Alike 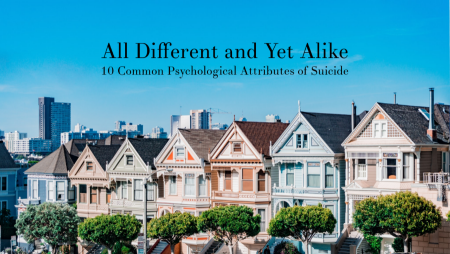 No two survivors of suicide loss are exactly the same, either. Two mothers may both lose sons and yet a multitude of attributes such as their personalities, relationships, social and support networks, environments, etc., can never be exactly the same. Survivors are like snowflakes. They have so many characteristics which make them one-of-a-kind, and yet they have certain traits that are theirs alone.

The “unique-yet-same” condition may also exist for those that have passed due to suicide. Just like survivors, they are each individual and irreplaceable and no two will ever be exactly alike. And yet, they do have similarities that are common to most or all of those that complete suicide.

Edwin Shneidman is a noted suicidologist and co-founder of the American Association of Suicidology, (www.suicidology.org.) In his book The Suicidal Mind, (Oxford University Press; Revised ed. Edition, April 23, 1998), he outlines what he calls “the 10 psychological commonalities of suicide”: