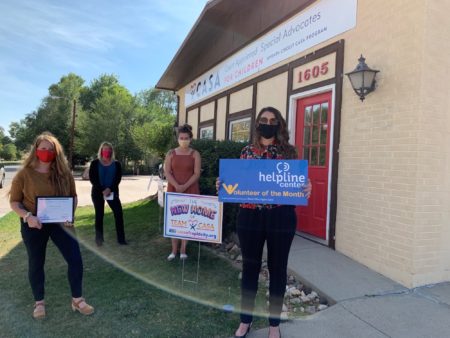 RAPID CITY – The Helpline Center and Black Hills Urgent Care are pleased to announce that Karie Kennedy has been named the September 2020 Volunteer of the Month. Karie was nominated by Seventh Circuit CASA in Rapid City.

As a CASA volunteer, Karie has served as an advocate and change agent on behalf of two local children in foster care over the past year. Karie has built a relationship with these children and connects with them weekly. Karie’s efforts embodies the full impact and meaning of volunteerism. Karie’s volunteer activity centers around being a continued presence and action-based force in the children’s lives; this is carried out by consistent contact with the children and their providers, including but not limited to their placement, caseworker, teachers, counselor, etc. Karie’s visits with the children range from spending time with them at their foster placement to taking them on an outing the community.

Additionally, in respect to the court proceedings, Karie writes court reports prepared for case hearings, which is described as a formal letter to the judge. Its narrative speaks to the children’s experiences in foster care, progress or regress in daily life, any needs the children have that are or are not being met and much more, especially any recommendations Karie has in regard to concerns on behalf of the children.

All throughout this, Karie has been the familiar face checking in on the children from home-to-home and advocating for them to be enrolled in counseling. While the Department of Social Services does the best to their ability with available resources, caseworkers typically are able to visit the children in care only once a month. Being so, Karie has been a crucial resource to the case and the children’s attorney described Karie as effective and instrumental in decisions made on behalf of the case and the children’s future.

For information on volunteer opportunities, please call the Helpline Center at 211 or visit volunteer.helplinecenter.org

Black Hills Volunteer of the Month Sponsored by: